Death by a thousand little cuts is a modern metaphor for a slow process in which a multitude of small – seemingly inconsequential (but bad) – things happen that ultimately culminate in the destruction of whomever was suffering the events. Like all sayings, there is truth behind it: historically, the phrase refers to a form of Chinese torture in which death – literally – was the outcome for a victim who was slowly tortured by being subjected to the process having their skin sliced. Pretty gruesome, huh?

An analogous figure of speech can be constructed for the collective effects of gender harassment in the STEM community: discrimination by a thousand little acts of bias (in the form of putdowns, either conscious or unconscious), which has culminated in a loss of STEM talent. As I point out in all my talks on equity in STEM, so much of the discussion has been concerned with blaming women for dropping out of the STEM pipeline (they choose to leave; it coincides with childbearing years; they don’t want to “work hard”; women don’t “lean in”, etc.). Yet, aside from an increasing discussion on family friendly policies at the institutional level, comparatively few studies have been focused on the pipeline itself.

This is quite perplexing to me because, when my kitchen sink leaks, I don’t actually blame the water.  Of course I am upset that water is dripping out, especially if it gets on the floor and makes a big mess, but even if that happens I immediately understand even without thinking about it that the dripping water is a pipeline issue at its core, not a water issue. It is the pipeline that has failed: it corroded; the gasket got old and dry; roots grew in it; etc. Whatever the cause, the water leaks. To remedy this situation, I call a plumber, who examines the pipes, identifies the weak point(s) and then remedies the situation by fixing the pipe.

This evidence-based process is what we continue to need in STEM: Let’s stop blaming the women who leave and instead conduct a serious examination of the pipeline so that we can identify the underlying causes for failure. Only then will we be able to fix it.

There is new hope. Continuing with my broken kitchen faucet metaphor, the National Academies of Science, Engineering & Medicine have recently played the role of a diagnostic plumber through a report they published this past June on Sexual Harassment in Academia. Their essential diagnosis is that the STEM pipeline is a hostile place for women. And although this NAS report has a dominant focus on the experiences of white women, their bottom line assessment of the STEM enterprise as a horror house for women (my words, not theirs) is most likely also true (and probably worse) for women of color, under-represented minorities and gender and sexual minorities.

Let’s pause and consider some facts from the NAS document: 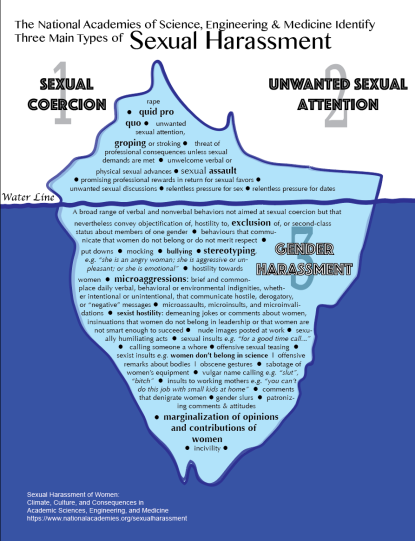 These facts (and more) in the NAS report define why the STEM pipeline leaks of women are not a trickling drip, drip, drip, but rather a gushing exodus.

Women leave because of a deep-seated institutional culture that tolerates tiny little acts of discrimination mediated by a plethora of putdowns that happen day-in and day-out. Altogether these send the message that women’s contributions, opinions or competencies are not valued as much as men’s are. And as a woman or any other member of the “out group”, it takes great fortitude and dedication to stay in a job/career/environment that incessantly makes a statement that you do not belong.

Plugging the leaky pipeline is a big, multi-scale problem, and to their credit, the NAS has come up with 15 broad recommendations that cover everything from new laws and policies to a re-envisioning of graduate training to a raised awareness of personal interactions. As an active member of the STEM field, I particularly gravitate towards recommendation #15, which indirectly points out, as the cliché goes, “we have met the enemy, and s/he is us”. This realization is at the same time intimidating and empowering because it means that we, alone, possess the ability to build a better pipeline. Because, as I wrote over at the Biophysical Society blog…

We – the current practitioners – are the so-called STEM pipeline. We are the core structural elements of academia. We are the lives and souls of universities and research centers. The institutional transformation we so urgently need is not the metamorphosis of a nameless, faceless entity that is someone else’s problem. Rather, our institutions are composed of people: presidents, provosts, deans, faculty, staff, and students. We the people must develop the resolve to solve this problem. Any change must come from within us. We all need to plug the leaks in our STEM pipeline through our actions and words each and every day. All of us at all levels, collectively and individually, have a responsibility to create and nurture inclusion throughout the scientific enterprise.

Let’s stop the leaks in the pipeline. Inclusive excellence depends on it. The next generation is counting on us.